The Origins of Bluegrass clubs and festivals in Indiana 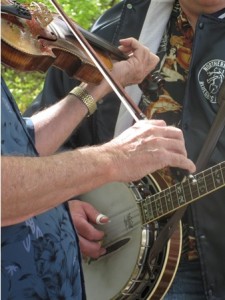 The word "festival" is defined as "A time or day of feasting or celebration," "Celebration or series of performances," and "Merrymaking." All of these occur at a Bluegrass festival. How did these Bluegrass events start? Who was responsible? Who did the first outdoor and the first indoor festivals? When did Bluegrass festivals become a part of the scene in the Hoosier state? This article will hopefully provide answers to those questions.

The first event that used the words, "Bluegrass Festival," was promoted by the legendary singer and recording artist, Bill Clifton. The location was Oak Leaf Park in Luray, Virginia, and the date was July 4, 1961. This was also the first time that more than two well-known Bluegrass acts were booked on the same show. Prior to that occasion, one or two Bluegrass bands would be booked on a country show of that period. The festival was a one day event that featured Bill Monroe, The Stanley Brothers, The Country Gentlemen, Jim and Jesse, Mac Wiseman and Bill Clifton. This was also the first time that Bill Monroe called former members of The Blue Grass Boys to the stage to play and sing. When 2,200 people attended the show, it opened up a new venue for Bluegrass music.

The first three day Bluegrass festival was held in Fincastle, Virginia in 1965. The promoter was Carlton Haney. Mr. Haney received a Certificate Of Merit from the International Bluegrass Music Association, (IBMA), on September 27, 1990 in Owensboro, Kentucky.

The first Bluegrass festival to be held in the state of Indiana was hosted by Bill Monroe in June of 1967. The location was the Brown County Jamboree Park in Beanblossom that Mr. Monroe had owned since the early 1950s. The park is now named, The Bill and James Monroe Festival Park and Campground, and is the site of their festival in June of each year. Other events are also held in the park including the celebration of Bill Monroe's birthday in September.

The Indiana Friends of Bluegrass (IFOB) was formed in 1971 and hosted its first festival in 1973. This is believed to be the first festival in Indiana that was hosted by an organization dedicated to the promotion and preservation of the music. IFOB no longer hosts a Bluegrass festival.

The Society for the Preservation of Bluegrass Music of America, (SPBGMA) held the first indoor Bluegrass festival at the Lodge of The Four Seasons in the Lake of the Ozarks area of Central Missouri in 1973. This became the Convention and Awards show that was moved to Nashville, Tennessee in 1984. The event was held at the Marriott Hotel for three years and at the Opryland Hotel for two years. The Sheraton Music City Hotel has been the site of the SPBGMA event since 1989.

The Northern Indiana Bluegrass Association (NIBGA) was formed on April 4, 1976 at the Knights of Columbus in Fort Wayne, IN and incorporated as a not-for-profit corporation on August 22, 1977. Officers listed in 1977 filing were Don McFarland President, Jim Cornell, Pat Honeycott, Fay McFarland, Ken DeMarcus, and Leonard Prescott. Three names were offered for the group; United Friends of Blue Grass, United Blue Grass Association, and Northern Indiana Blue Grass Association. At the May 16, 1976 meeting NIBGA was chosen. At the time the definition for "bluegrass" music was not in the dictionary only "blue-grass" referencing the plant appeared. Since two words were used for blue grass, hence the origin of the initials NIBGA instead of NIBA. The Jimmie Brown logo on the masthead of the NIBGA newsletter first appeared on the June 1976 volume 1 issue 1 one page newsletter. Dues were set at $5 single and $10 family. That price held until the cost of postage and printing in recent years required an increase to $10 single and $15 family. In addition to 11 month newsletters, members still receive a $5 discount on weekend festival tickets.

The first festival was held over Labor Day 1976 at the D/B/A Tri-State Campgrounds west of Angola, Indiana. The weekend ticket was $5 and all of the bands played gratis. The facilities were an open field holding the campers, temporary electric strung for the weekend, and a stage located at the foot of a hill nestled among the trees. Bands playing were Moore Brothers, Endangered Species, Flatland Grass, Mason Dixon Express, Tri County Travelers and the Fox Brothers.

Funds for starting the association were raised by selling T-shirts emblazed with "I Like Grass" throughout the festival circuit. Only after hundreds of T-shirts were printed and many sold was it pointed out that the hippie culture of the early 70's found a different meaning in that phrase. The Memorial Day festival was started in 1977. After moving to several locations in the Angola area and in eastern Ohio in the 1980's, NIBGA has been hosting its festivals since 1990 on Friday, Saturday and Sunday of the Memorial and Labor Day weekends each year at the Noble County 4H Fairground in Kendallville, Indiana. 2019 marked the 43rd year of these events and the 30th year at the fairgrounds.

The Central Indiana Bluegrass Music Association was formed in 1983 by a break away group from NIBGA and held their first festival at the Busy Bee Campground the same year. As of 2006 the CIBMA ceased hosting festivals. They still publish a monthly newsletter.

We hope that we have been able to answer all the questions that were listed at the beginning of this article. Anyone that has something to add should communicate with the Northern Indiana Bluegrass Association by sending us a note.

AmazonSmile donates to
NIBGA when you do your shopping at
smile.amazon.com/ch/35-1424100

Kroger's will donate to NIBGA, no cost to you!
Instructions to designate NIBGA as your Kroger's charity here.

Sponsored in part by: